Instead of going back or staying in the current time, we are about to hop a bit ahead since new set Dominaria is ascending on our doorstep! Usually new sets don’t shake up eternal formats like Modern, Legacy and Vintage too much but there will be a new card that will have a strong influence for Modern at least. The card I’m talking about is Damping Sphere: 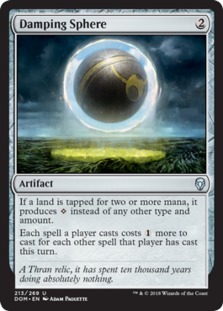 This little ball of doom will cause us some problems, it makes every spell played cost 1 extra for every other spell played that turn. So for example if you cast Serum Visions after Sleight of Hand, now the Serum costs 1U, and this effect only gets stronger by more spells we play. Also if they have multiple Spheres in play, that effect also multiplies.

It also hits Tron and Amulet Titan fairly hard, shutting of Tron-lands to produce only 1 colorless and it makes “karoos” also known as bounce-lands from original Ravnica only do colorless mana, instead of the 2 mana they make.

This card is very good, not only does it hit multiple decks at the same time, is colorless so basically any deck can adapt this and only costing 2 mana helps to get this out into play early, since Storm can even kill on turn 2 with the right hand or just puke bunch of goblins out. So even when being on the draw you should have time to play this card, especially if you pack some disruption like discard or counterspells. Especially GBx decks like Jund, Junk and GB will love this card since it hits their worst matchup Tron and also hoses Storm, and I do believe many other decks will also try this because it is a very hyped card.

It will see play in Modern, it’s pretty hard to say how many copies will end up in sideboards but only time will tell that. One good thing we can go for is that our opponents only have space for 15 cards so in order to make room for Spheres they probably have to cut some other hate.

How to navigate through hate with Storm

This section will give you tips and tricks on how to combat the hate cards we usually have to deal with. So let’s have a look at the most prevalent sideboard cards we have to content with:

If you play Storm, these cards are fairly familiar to you, however we are prepared for these cards after sideboard and frankly there is only few cards in our sideboard which we use to combat these cards, so let’s go over them!

So this section includes Thalia, Ethersworn Canonist, Gaddock Teeg and Eidolon of Rhetoric. Easiest way to deal with these is Lightning Bolt, however Eidolon is a bit trickier since it has that pesky 4 toughness so Bolt won’t kill it. For that we can use our bounce spells like Unsubstantiate, Repeal, Echoing Truth or Wipe Away. Or if you happen to run Dismember that is also an option.

Here we have Rest in Peace, Leyline of Sanctity, Leyline of the Void, Rule of Law, Relic of Progenitus, Nihil Spellbomb, Chalice of the Void and Grafdigger’s Cage. These can only be answered by our bounces or artifact removal so the same cards as above + Shattering Spree and Abrade. We can also use Gifts Ungiven to find these effects but be wary that Leyline of Sanctity does shut Gifts off. Alternative route which I often take is that you can sort of ignore these cards with Pieces of the Puzzle and Empty the Warrens since they don’t really require our graveyard to be online. Also Merchant Scroll shines here since it can get you the bounce for these annoying permanents. Damping Sphere falls in the same category, my main advice would be to bounce it/destroy it with Shattering Spree/Abrade or just make horde of goblins before it hits the table.

Last but not least we have Surgical Extraction and Extirpate. Navigating through these is much harder since they can just sit with this in hand and wait for the spot to blow us out. Really the only thing you can do is to generate enough mana after Gifts to flashback  Past in Flames immediately. This would mean that you have 5red in pool after Gifts since then you can flashback Past, and respond by playing your rituals from hand. If you first play the ritual they can respond with Surgical and then we lose the Past in Flames. Since you have priority after Gifts, they can’t Surgical/Extirpate you immediately. Of course they still get to then take away our Gifts most likely, but you are still left with multiple cantrips and card draw effects which should be enough to find the win! Also if you hold Noxious Revival, that has you covered against these effects. (Well Extirpate can still get you but that doesn’t see as much play thankfully)

So we have pretty exciting (and perhaps) dark times ahead of us, Damping Sphere is poised to shake up modern and we just have to adapt to it. But just like any other hate this can also be answered by the same cards like before. And like I always say “End of turn Echoing Truth, Untap I win” So don’t lose your hopes just yet and keep Storming like normal!

Hi! My name is Juuso, Storm-fanatic and longtime mtg-player. Here you will find tournament-reports, deck-techs and random posts about my mtg-lifestyle. View all posts by Juuso

One thought on “Dominaria rising, Damping Sphere on the horizon.”